This post is a bit delayed but I’ve gotten behind with Yuki being so sick for over a week and Project Run & Play starting up (I got a little caught up in getting something in for their Sew Along).

This year we celebrated what felt like Yuki’s first real Christmas.  Last year, Yuki was 4 months old and just a clueless little newborn.  I don’t even remember how we celebrated Christmas morning, but we certainly didn’t have a tree or stocking or lights, though there were some gifts for Yuki from family members.  This year, at 16 months, we made a little more of an effort for her.  We got a real tree (my first ever!), made a stocking, wrapped some presents.  It was totally low key and really fun!

I wasn’t really going to get Yuki any presents since she’s still too young to understand the concept, but our poor tree looked so lonely so I gave in and got her some fun things to unwrap.  I’m quite proud of my cheap finds, so even though most of them have nothing to do with crafting or sewing, I’m going to share them with you anyways.

The first gift she actually found on Christmas Eve. 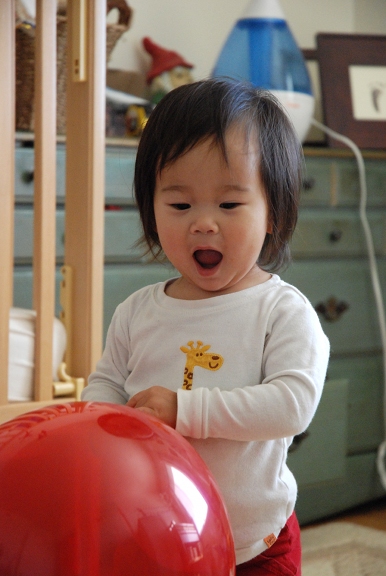 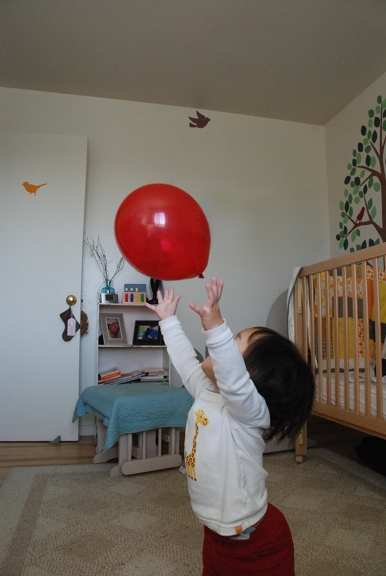 Yup, that’s right.  I got her a balloon.  Actually, a whole bag of balloons, but I’ve only had to blow up 2 and I’m saving the rest for rainy days.  And she LOVED it.  Super cheap and so much fun, no?

On Christmas morning, Yuki found a couple of surprises around her tree.  The first was a huge white balloon with a rubber band attached to it.  The kind that you hit back and forth like a super fast yo-yo.  This was only entertaining to her for a few minutes since she isn’t coordinated enough to use it yet.

There was also a stocking filled with little gifts.  The first was a pair of 99 cent sunglasses from the thrift store.

A set of plastic keys on a keychain (with car alarm noises and all).

A new box of crayons!

The Japanese books that Hideko picked out are a huge hit.  They are from the series Nontan and I remember having some of these books when I was a kid too!

Yuki’s favorite toy that morning was this ridiculous toy I got at the thrift store (also for 99 cents!).  It’s a phone that talks, plays music and makes animal sounds.  It’s pretty obnoxious, but I knew she’d love it.  Aren’t her movements/expressions here hilarious?  It looks like she’s been doing some good observing . . .

I wanted to do something handmade, so I decided to make Yuki some plaid flannel pajama pants to go with the ones that Hideko and I wear all the time.  It was perfect for me since it was such a simple project.

I wanted to make something that would fit her for a loooong time, but they ended up being HUGE!  I might have to do a few more minor alterations so she doesn’t trip all over them, but it’s nice that there’s so much room to grow into.

One of my other holiday projects was a stocking for Yuki.  I had this idea to make it out of a an old sweater that I found at the thrift store.  In my mind, it seemed like a great idea, but it didn’t work out as well as I’d hoped. 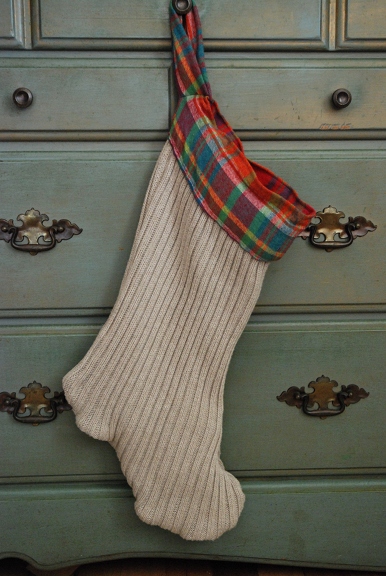 The main thing I don’t like about it is how lumpy the bottom is.  😦  Oh well, I’ll try again next year!

After our quiet Christmas morning, we went on to spend time with family (where Yuki was spoiled by more gifts!!).  It was a really lovely Christmas and now I can’t wait till next year!  Somehow I have a feeling I’m not going to be able to get away with thrift store 99 cent gifts though

I have one more holiday project to share with you this week then I swear, I’ll put Christmas away!