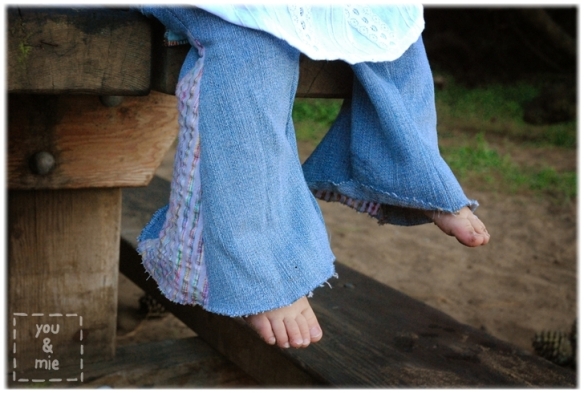 The theme for Project Run & Play this week is “Sewing Through the Decades.”  The assignment was to pick a decade and design a children’s outfit based on the fashion trends of that decade.  I just took a look at the Flickr pool to see some of the other entries and there are some fabulous outfits!!

I had a hard time coming up with this week’s outfit.  There wasn’t one decade or style that was screaming out at me.  I considered doing a popular 50s girls dress with the poofy skirt and all.  At one point I wanted to recreate one of my mom’s outfits from the 50s.  Or do a 60s mod dress.  I love 20s style dresses, but I didn’t think the ones I really liked would look good on a toddler’s body.  I even considered an 80s Madonna tribute.  It’s pretty random how I ended up picking this style.

I chose this 60s hippie/flower child look because of a picture of a flowy top I came across while doing some research.  It looked so pretty, so I drew a sketch of it and though I kept looking for more ideas, I kept coming back to that sketch.  I wanted to do a hippie look – but not like the tie-dyed, super bright and colorful peace signs and big flowers exaggerated hippie look, but the bohemian flower child, super earthy, war protesting, barefoot kinda hippie of the late 60s.  It’s probably because I could kinda see myself as one, had I lived during that time.  I didn’t realize that San Francisco was the epicenter of the hippie subculture in the mid to late 60s.  It made me want to take my little hippie child down to Haight-Ashbury or Golden Gate Park for our photo shoot to recreate some fun scenes.  It may seem a little inappropriate for a child, considering drugs were such a huge part of the culture, but that part aside, it was a really fun style to try.

I had a few goals in mind for this week:
1. Sew something new and different (this is kind of a goal that I always have).
2. Keep it simple.  I knew I couldn’t go all out and pull off 5 pieces like last week.
3. Make something that fit the theme (was inspired by a past decade), but was something that Yuki could wear again as part of her regular wardrobe.
4. Blog about the outfit before uploading my pictures to flickr by Friday at 8am.

I accomplished the first and last goal!  I did attempt something new with both the top and the bottom.  Both pieces were completely new to me.  And look, a blog post before the deadline (barely, but still)!

As for keeping it simple, I tried.  I didn’t have the time to make a super elaborate outfit this week – nor did I have the inspiration.  So I thought I’d do something really simple this week and maybe start a little early on next week’s challenge (didn’t happen).  I wanted to do 2 simple pieces, a top and a bottom.  I made a fairly simple blouse pattern with no real crazy details or embellishments.  I hit a few rough spots when I was constructing it, but I was able to finish it in half a day and once it was done, it didn’t need any altering (thank goodness)!  I kept it pretty simple!

The bottoms however are a different story!  Originally, I made some denim cut-off shorts.  I spent a decent amount of time adding a lot of detail to the shorts to make them look like real jeans (I was inspired by all the great pants made by the contestants for Boys Week).  After they were done, Hideko said that she didn’t think it went with the top and the overall hippie look (she loves to give me her opinion AFTER I’ve finished making something :)).  She thought I should make bell bottoms!  I wasn’t planning on making anything too “hippie” because I wanted her to be able to wear it again.  But I gave in.

I had a pair of my old jeans that I thought I could use for the bell bottoms.  Since I was quite sure Yuki wouldn’t be wearing these again, I didn’t want to spend a ton of time on them.  But they ended up being the most time consuming part of the outfit, BY FAR.  I hacked apart my jeans trying to make them fit my 16 month old and make them bell bottoms.  When I tried them on her, they didn’t look bell bottom-y enough, so I decided to add the triangles of fabric to really exaggerate the look.  Why not go all the way!?  They certainly look the part now!

I didn’t hem the bottoms, so they’ve have a bit of a tattered look – I just zig zag stitched the edge.  I hope to have a tutorial relating to these pants next week, so look out for that, if you’re interested!

So, I was able to keep the top simple, but spent too much time on the pants.  She’ll definitely wear the top again, but probably not the pants (unless we have a costume party to go to).  Overall, I’m not THRILLED with how the outfit came out.  I do like the top, but it looks a little oversized on her.  The bodice is perfectly fitted, but the sleeves and the body probably could have been a bit shorter.  The pants are also too long, so I’m afraid the whole outfit looks a bit sloppy.  Maybe accurate, but still a little sloppy.

I did have fun putting together a few accessories for the photos though.  I just bought some cheap wooden beads and strung them randomly on some string for her necklace.  I got a yard of leather and added some beads and glued a few feathers that I already had at home to the ends for the headband.  I also took a fake daisy and glued it to a clip for her hair, though it fell off half way through the photo taking.

I had a lot of fun on this photo shoot!  It was a chilly morning on the beach, but my crazy child wanted to go IN the water.  The FREEZING water.  She kept walking towards it and though it would have made for some cool pictures, I did not want to lose my child in the ocean while I was snapping away on my camera!  We did both get our feet wet though.  I think I do have a little hippie child.  Take a look at her dirty wet little feet.

After we finished taking these pictures I put her in some dry clothes and had a little cracker treat.  She was quite a trooper! 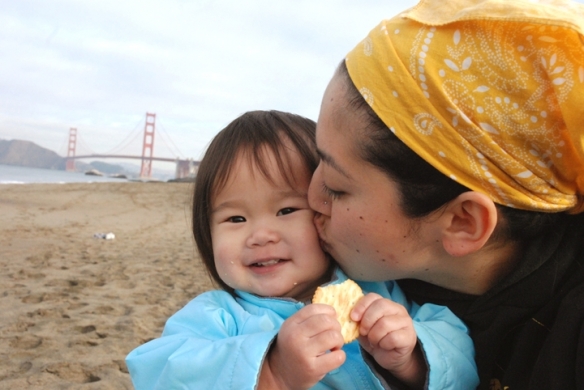 Next week’s theme is Outerwear!  I THINK I know what I want to make, but it’s going to be quite a challenge.  Have you ever looked at jacket construction?  It’s complicated!  What I probably SHOULD make is a raincoat – it’s finally started raining and it looks like it’s not stopping any time soon!

What have you been up to?  Hope you’re staying warm and dry!