But I hope you all enjoyed a happy Halloween (for those of you who celebrated)!  I realize it’s a bit late to be sharing our Halloween costumes, but that’s how things are rolling around here, so let’s just go with it, k?

So in the weeks leading up to the holiday, I had been asking Yuki what she wanted to dress up as.  Her answers changed every time I asked.  First, it was a purple dinosaur.  Then a pumpkin dinosaur – though I have no idea what that is!  Then she would just name whatever was nearby or happened to be on her mind, so I would get answers like “juice box” or “Mercury” (the planet).  We started planting the idea of Ladybug Girl into her head because we thought it’d be a fun and easy costume, but one she could get into.  Ladybug Girl is a character from a series of children’s books.  The stories are about a young girl named Lulu who calls herself “Ladybug Girl,” wears a costume, and likes to have adventures.

Yuki was still throwing out ideas like cat and owl, but when I found a pair of ladybug wings and a wand at Joann for 60% off, I decided it was meant to be.  I was worried that Yuki wouldn’t get on board, but took the risk anyways.

I had plans to make the costume identical to the book character, but you know how things change.  I knew Yuki would get excited about a tutu though, so I used one of the thousand tutu-rials out there to make one with red tulle from Joann.  And as expected, she loved it. 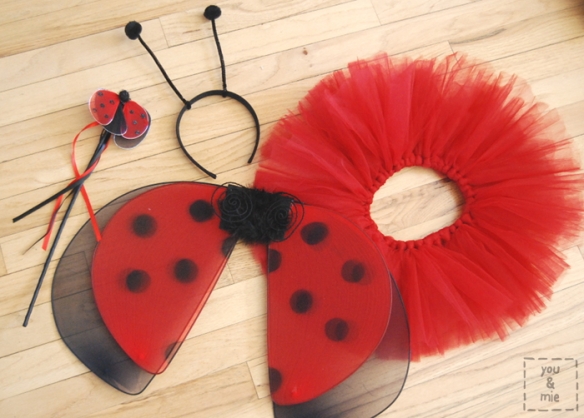 Before I keep saying Joann, Joann, Joann – I’ll just say that I pretty much got everything I needed for both costumes at Joann.  This is not a sponsored post.  I just bought all the supplies on one trip, thank goodness for that!

So anyways, the headband is one of the few things that I got elsewhere.  Picked it up at a drugstore and used pipe cleaners and pom poms to make antennae.

The shirt was made using the ever useful Flashback Skinny Tee in size 3T (you know I love this pattern, right?).  At first I just made a solid red tee like Lulu’s, but after seeing the costume the weekend before, Hideko felt like adding spots would make it more ladybug-ish.  Here’s what it looked like before:

So I picked up some Tulip Fashion Glitter and tried that out for the first time.  I thought Yuki would like the sparkles and I could use the other colors on future projects.  If you use the Fashion Glitter pack that I did, you’ll need to buy the bond/glue separately.  I made a stencil to get the circular dots and the glitter was easy to apply.  Some of it came off during the drying/wearing stage, which I expected, but it held up really well otherwise.  I’ve washed and dried the shirt once (inside out) and it lost some of it’s glitter, but still looks pretty decent.  I’ll have to try it out on another project and see how it holds up through multiple washes.  I’m glad I added those spots though – I think they add a lot to the costume. 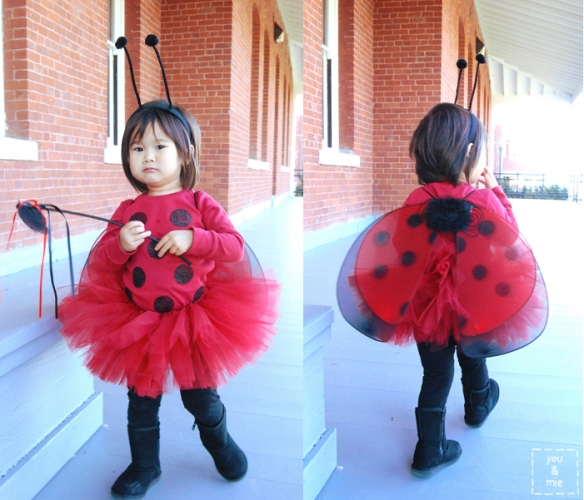 I also made a little pair of shorts to go under her tutu using the Fancy Pants Leggings pattern.  They came together really quickly and I like how they came out, but I’ll never know how the fit was because Yuki refuses to wear them.  So she ended up wearing the plain black leggings I made for this outfit.  Her boots are from Target.

The best part about her costume is that she absolutely loved it and seemed so proud to be wearing it.  She loved going up to other kids and saying, “Hey, I have wings like you!” or “You have a wand like me!”  (She’s really into comparing herself to other people these days – ugh).  But I didn’t have to bribe her to put it on like other costumes and outfits I’ve made for her!  I did, however, have a really hard time photographing her like always . . . 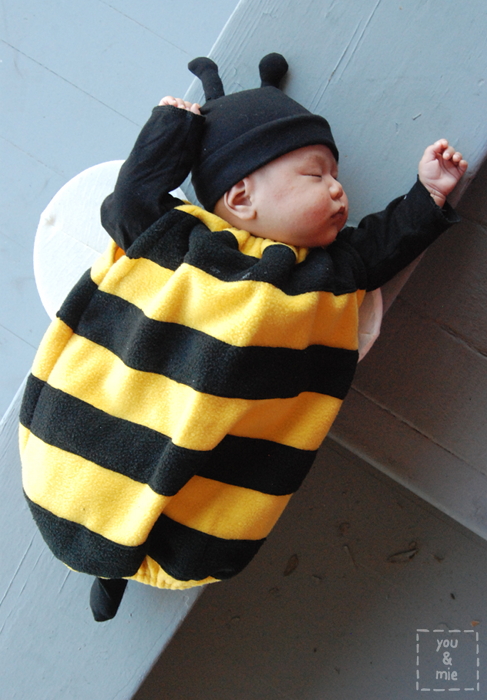 There she is, zipping through the air!  Haha.  So I know it’s a little ridiculous to dress up a one month old, let alone hand-make the entire costume the day before Halloween, but I couldn’t resist.  When I decided on Ladybug Girl for Yuki’s costume, a bumblebee seemed like an obvious choice for Kaya, so I went ahead and bought the yellow and black fleece.  But a couple of days before Halloween, I still hadn’t had time to make her costume and I had to accept that it just wasn’t going to happen.  It wasn’t worth it if I meant having to loose sleep.  I went to bed pretty disappointed that night (If you don’t know me, let me just say that Halloween/making costumes is kinda my thing.  So it’s a big deal).

Then I woke up the next morning at 5am and decided it was a good time to start that damn costume after all.  It came out pretty decent considering I was determined to make it the fastest and simplest costume ever knowing that it would only get a few hours of wear.

The body is just a simple sack with an elastic casing at the neck and bottom with armholes.  I cut the stripes from black fleece and just top stitched onto the yellow fleece before sewing up the sack.  The wings are made from boning since I wanted something softer and more flexible than metal wire.  I just stretched some thin knit fabric and sloppily sewed/tied it on.  Not my best work, but no one could see the other side anyways.

I made the tights using Rae’s Baby Tights tutorial some black knit in my stash.  She offers a  free pattern for the tights in 3-6 mo. size, but since Kaya is a bit younger/smaller than that, I tried to size it down.  Unfortunately, I sized it down too much and I could barely get them over her bum!  Mostly because she wears cloth diapers but I had also shortened them too much as well.  They were super easy to make though, so I think I’ll try again with a better idea of how to make adjustments to the pattern.

I made the beanie using Zaaberry’s free baby hat pattern and tutorial.  I made the antennae with the same black knit and stuffed them with some poly-fil.  At first I tried to sew them into the seam to save time, but they just flopped down.  I really wanted them to stand up when worn, so I cut them off and hand stitched them on real quick.  Again, not my finest sewing, but that’s what Halloween costumes are about right!?

We went trick-or-treating with Yuki’s school during the day around some local businesses and Yuki was super excited and proud in her costume and Kaya slept the entire time getting lots of little “oohs” and giggles from other parents and kids.  So was it all worth it?  Absolutely.  And maybe a bit ridiculous?  Absolutely.  But that’s me!

How was your Halloween?  Did you make any costumes?  What was the best costume you saw this year?  And are you ready for Christmas?  Cuz the rest of the world seems to be getting ready already.  I can’t handle that.  It’s November 7th and I’m still on Halloween.