Phew!  This Halloween costume has been in the works for, what feels like, fooorever.  It’s ridiculous when I start thinking about just how much time (and money) I’ve spent on this kid’s Halloween costume!  But it was such a fun challenge for me – I really love making Halloween costumes!!  I get a lot of enjoyment out of trying to figure out ways to translate a picture or a character into something tangible, an outfit, or a costume.  So here’s the back story . . .

Yuki started watching the popular series, My Little Pony: Friendship is Magic, about six months ago.   In the first 2 episodes there is a villain, Nightmare Moon, that Yuki immediately latched onto.  It’s not the first time Yuki has connected with an antagonistic character – I’m not sure if you remember 2 years ago, Yuki was into Swiper the Fox, from Dora the Explorer.  Anyways, this one was a little surprising because Nightmare Moon is SO EVIL and SO SCARY.  She’s got this wicked cackle that both Yuki and Kaya have mastered (a little too well).  But starting a couple of months ago, Yuki decided she wanted to be Nightmare Moon for Halloween.  I waited for awhile to make sure that she wasn’t going to change her mind.  But she was quite set on it, so I started brainstorming.  This wasn’t the easiest to translate into human/kid form.

Nightmare Moon is the evil alter ego of Princess Luna.  My Little Pony legend tells us that Princess Luna once controlled the moon and ruled over the land with her older sister, Princess Celestia, who raised the sun every day.  Princess Luna became jealous that all the ponies enjoyed and appreciated the day, playing in the sun, but slept through the beauty of the night.  Her bitterness took over and she transformed into Nightmare Moon, who refused to lower the sun and promised eternal night.  She was then banished to the moon by her sister.  You should definitely watch this video of Nightmare Moon and Princess Celestia battling it out. 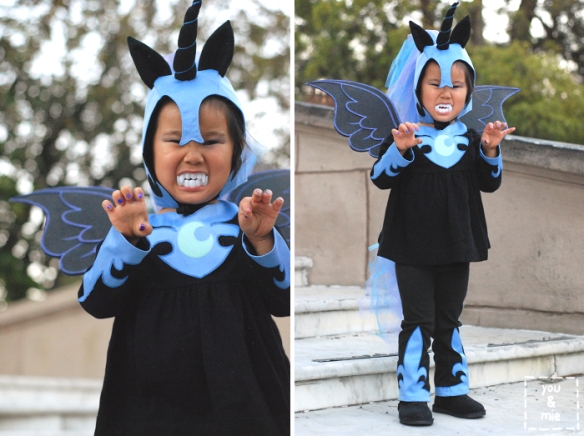 Spoiler alert: Nightmare Moon is defeated and transformed back into Princess Luna, who once again takes her place next to her sister to rule Equestria, the land of the ponies. 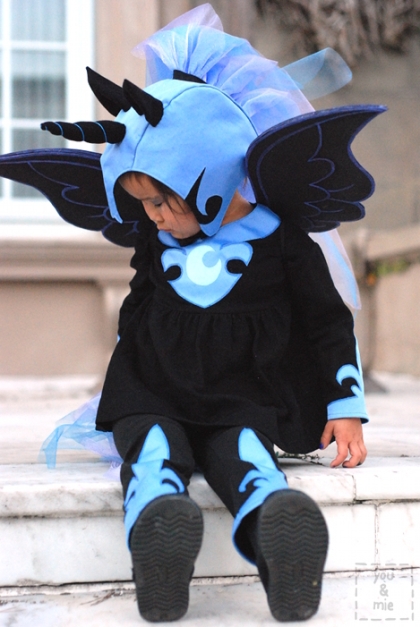 ANYWAYS.  Moving on from Pony history . . . The costume had me a bit stumped at first.  Sure a shirt and pants, but how would I made a helmet?  How would I make her shimmery floaty mane and tail?  I mulled over it for a long time.

I knew I wanted to make a shirt and pants for Yuki that she could potentially wear again later and separately if she wanted to.  I used the Oliver + S Playtime Tunic/Dress and Leggings pattern for both the top and the bottom.  I made the top with black double gauze from Miss Matatabi and made it so the facing would be on the outside of the shirt.  I changed the shape of the facing in the front to mimic Nightmare Moon’s breastplate (or whatever that is). 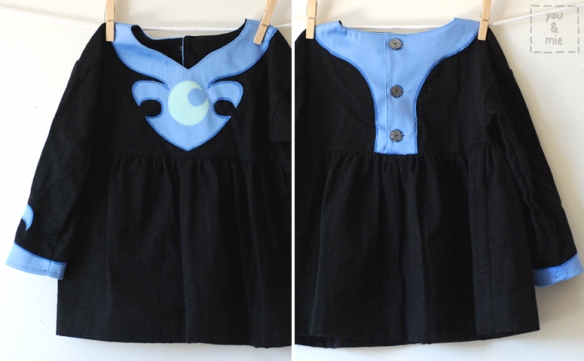 The fabric that I used for all of the armor details is some sort of suiting from Joann.  It is a woven fabric so I had a hard time figuring out how to sew it on without it fraying.  I tried a zig zag stitch around the edge, but I didn’t like the way it looked.  So I ended up using fusible web on all the pieces and then painting the edges with fray check and just top stitching as close to the edge as possible.  The fray check left the edges slightly darker than the fabric which was perfect since the character’s armor has a darker blue outlining all the edges as well.

The pants were made using the leggings pattern, but I flared out the bottoms to look more like yoga pants.  I appliqued the “cutie mark” (cloud/moon symbol on her rear) and the “armor” before assembling the pants.  Both the shirt and pants are size 3T and they fit her pretty perfectly. 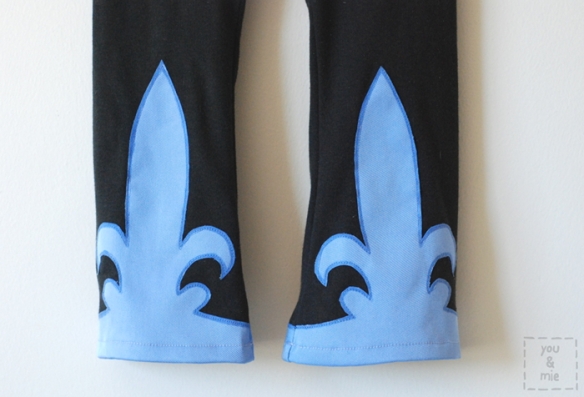 The helmet had me pretty stumped, but it finally came to me to make a version of Oliver + S’s Cozy Winter Hood from their Little Things to Sew book (affiliate link)!  I made the medium size hood, but altered the shape of the center panel to look more like Nightmare Moon’s helmet.  I actually ended up making TWO helmets because the first one just didn’t work out right.  It took me a while to get the shape and size right of that extended piece.  I also chose the wrong fabric for the lining and messed up the detail on the side of the helmet.  I omitted the ears from the pattern, which is sewn into the seam and I hand stitched self drafted ones and a horn to make sure they stood up and didn’t flop over 🙂

I thought it would be cool to add some sparkle because both Nightmare Moon and Yuki are into sparkle, so I tried this glitter fabric spray.  Like an idiot, I tried it on the finished helmet not realizing that it leaves dark marks on the fabric.  It’s not super noticeable, but you can see it close up and it bugs the crap out of me!  Oh well.  I put the helmet aside because I had no clue how I was going to make or attach a mane.

Next up were the wings.  I used this tutorial for basic construction of the wings, altering it for my needs.  I used 4 large sheets of craft foam and each wing is 4 layers.  Looking at the image of Nightmare Moon, I drew two wing shapes that were meant to be overlapped.  I cut them out with an X-acto knife, then used a purple paint pen to draw the outline and details.  After gluing it all together, I used Krylon Glitter Shimmer in Moon Beam Black and IT WORKED PERFECTLY.  Just how I imagined.  Which is more than I can say for the fabric glitter spray.  I kinda think the wings are my favorite part of this outfit.

We found the boots that Yuki wore last year for Halloween (they were too big for her then and disappeared afterwards since she never wore them).  And now they fit perfectly!  Hideko had the brilliant idea of spraying the boots too, just for extra sparkle (really anything to get Yuki to be excited about wearing them). 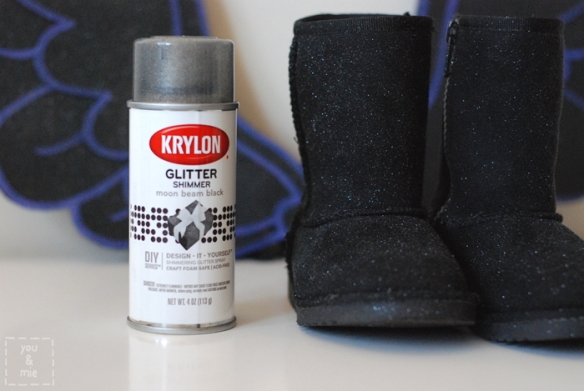 This stuff has been great in my experience.  It has a really strong smell at first (so definitely spray it outside), but I haven’t noticed it on the items since and they are both kept inside.  I put some paper inside each boot to prevent the spray from coating the inside (I wasn’t sure if it would make it stiff or scratchy), and I also unzipped the boot right after spraying so that it would seal shut. 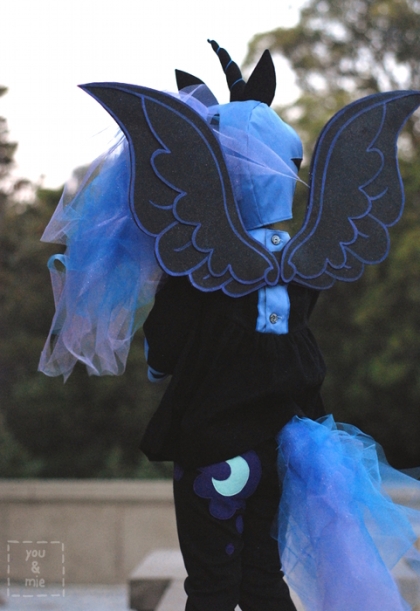 So finally I had to tackle the mane and tail – it was the only part left.  If you look at the picture of Nightmare Moon, her hair is this magical, floaty, ethereal, glowing mass.  What?  How?  Why?  I had no clue how to try and replicate that.  In most of the Nightmare Moon cosplay I had seen, people wore long curled purple-blue wigs.  I was going to go that route and just attach it to the helmet, but I couldn’t find the right color and I wasn’t sure if it would look right for a kid’s costume.  So I decided to cut up some tulle and while it’s not exactly what I want it to look like, I think it came out ok and definitely looks floaty and sparkly at least.

I used two different colors of tulle: blue and glittery purple.  I laid them out and cut them to the general length that I wanted the mane and tail.  Then, with each layer separately, I cut one edge of the tulle into wavy hair-like strips.  Then I layered about 4-5 pieces of cut tulle and folded and rolled and scrunched up the other end to gather it into a pony tail.  I stitched it together to hold it in place and then hot glued felt around it to secure it together, then hand stitched that onto the helmet for the mane and onto elastic for the tail.

Unfortunately, it added weight to the back of the helmet so that it keeps sliding back and that nose piece often ends up near her forehead.

And that’s about it!  This costume took me a good 2 weeks to put together I think.  I seriously underestimated how long it would take.  Usually I can put together an outfit in 1-2 nights if I’m putting in the time, but there were just so many pieces and so much trial and error (LOTS OF ERROR).  I think I went back to the fabric store 3 times to get more stuff I needed.  In the end, Yuki likes the costume, but I don’t think she has any clue how much went into it.

People say, “You’re such a good mom, I just bought our costumes at the store!”  But if I’m being honest, I didn’t do this for Yuki – I didn’t stay up countless hours and spend lots of money because I wanted to make her happy.  She would have been just as happy with a store bought costume (if one existed for this character) or a much much simpler version.  But I did it for me.  Because once I had the challenge, it was my personal goal to make a kick ass costume.  I wanted to see how well I could match some of the details while still making it wearable for a 4 year old.  And I struggled and cursed and suffered some extreme exhaustion, but I LOVED it.  I’m really starting to understand why people enjoy cosplay so much!

Anyways, for all of those celebrating Halloween, have a spooky, silly and safe time!  Share your costumes with me – I LOVE seeing all the creative and fun ideas!   And beware the legend of Nightmare Moon.  She will return once again!  MUHAHAHAHAHA!  😛