I said I was going to post one more holiday project, but before I do I wanted to share my outfit for this week’s Project Run & Play sew-along.

This week the theme was BOYS!  I find that unique boys clothes are hard to come up with and difficult to make well.  I think that if I have a son someday, I’ll really be pushed to be creative and it was fun challenging myself this week.  I have a daughter, but we dress her up in plenty of boys clothes, this was just my first time MAKING any.  It was also my first time sewing with knits!!  Feels so good to learn new things, especially something that I’d been so scared of for so long!  Anyways, here is the finished outfit.  Hideko thought of the name because of the bicycles on the orange accent fabric and because we thought it might be something a hipster bicyclist might wear. 🙂  Presenting Boy-cycle Wear! 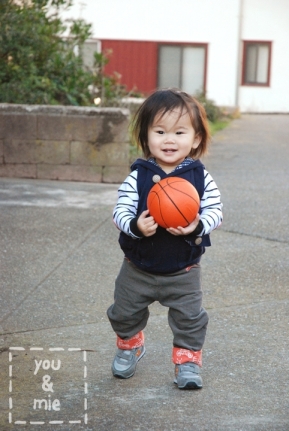 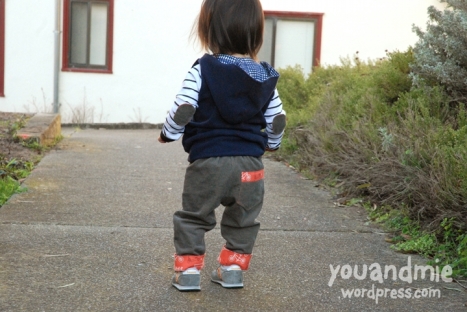 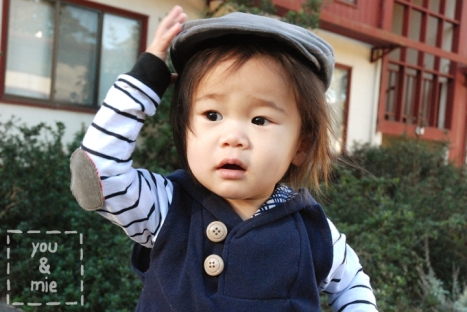 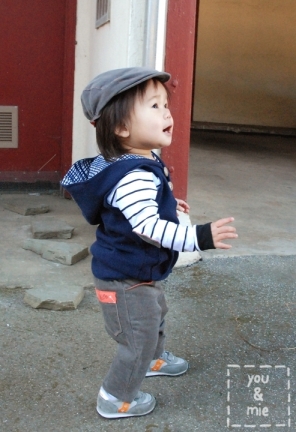 For this outfit, I actually made FIVE pieces.  I was being way too ambitious.  I made pants, a shirt, a hooded vest, a hat and a tie (shown later).  The outfit is a bit more mismatched than I had in mind, but oh well.  Kids are supposed to be mismatched right!? 🙂  Here are some of the details.

I made the pants first.  I wanted to try more of a straight leg pant (as opposed to my usual boot cut) with some fun cuffs and pocket detailing.  I’ve been using this orange fabric with bicycles on it (this one) for a few projects recently and thought it’d be cute here too.  That’s how the bicycle theme was chosen.  I made 2 pockets in the front, one in the back and cuffs.  This piece was pretty straight forward.

Next I made the hat.  I used this tutorial from Bandy Canyon.  She actually provides a pattern as well, so if you’re interested, I would definitely check it out.  I drafted my own pattern from a similar cap that Yuki already owned adjusting shape and size.  This piece was tricky and I actually had to do it twice.  The first time I wasn’t sure if my pattern was going to work and it didn’t and the hat came out kinda wonky.  The second time was way better except it was WAY too big.  If I tried a third time I’m sure it would have been perfect, but I didn’t have the time or patience to do it again.  Instead I just added a lot of elastic to the back to make it fit.  It’s still a little on the loose side, but that means she can grow into it!  Unfortunately, Yuki HATES wearing hats and refuses to keep them on.  It’s a miracle I even got a few pics of the hat on her head, but I assure you it was only a split second later that the hat was back on the ground.

Next I made the shirt.  This shirt is a huge triumph for me because it is my first successful KNIT project.  Yes, I am one of those people who is totally scared of knits.  It started this past summer when I tried to make a dress with a knit bodice.  I thought the stretchy material would be great and I wouldn’t need a zipper or button closure because the neckhole would stretch to fit over Yuki’s head.  What I didn’t know was that if you sew it like regular woven fabric the material doesn’t stretch because of the stitching.  I finished the dress and then had to cut it open when I realized it wouldn’t fit over Yuki’s head.  Tragic.

Since then, I’ve avoided it at all costs.  I started collecting some information and doing a little research (there are some great resources for sewing with knits out there), but I was still confused and nervous.  But when it comes to boys shirts I felt like I didn’t have many options, either attempt a knit shirt or a collared shirt.  Both were daunting, but I’d wanted to learn how to sew with knits for awhile and it seems so practical (there are so many amazing things you can make with knits!).  Plus, learning how to sew a collar was not a task I was about to attempt in such a short amount of time (I had about one night for each piece of the outfit).

ANYWAYS, I tried two techniques: the double pointed needle and the stretch stitch (which looks like an angled zig zag stitch).  Both worked well, but I had to play around with the stitch width and length and also the tension for different fabrics.  I made a simple long sleeved shirt which turned out fine except for the neckline which came out too wide.  After the shirt was done, I used a stamp that I had carved a long time ago for another project (so awesome that I happened to have a bike!) and some fabric paint to stamp the bike image on the bottom corner. 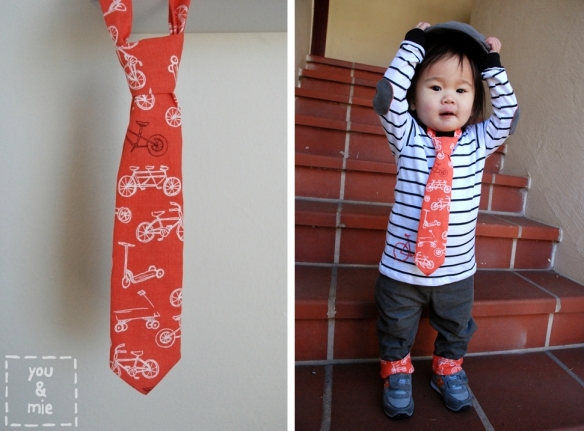 The fourth piece was this necktie that kinda ended up getting scrapped completely.  I used this awesome pattern and tutorial from Very Homemade.  Somehow I thought that it would show at the neck under the vest, but it didn’t.  It’s also too big, so it looks kind of ridiculous on Yuki.  I’ll keep it around for some other time or maybe give it away as a gift.  I love this picture . . . doesn’t she look like a mime or a clown!?

The last piece of the outfit is, without a doubt, my favorite – possibly even my favorite creation to date – the hooded vest.  I had this image in my head and wasn’t quite sure how to make it happen, but it turned out really close to what I wanted!  There are definitely things I’d do differently if I were to make it again, but overall, I really like it. 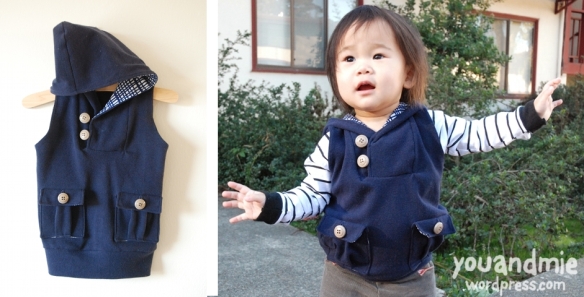 I’m not quite sure what this type of neckline is called, but it’s kind of popular these days, I’ve seen it on a lot of men’s and women’s sweaters.  In fact, I have a long sleeved sweater with a similar collar.  Except I wanted to turn the collar into a hood and instead of a sweater, I wanted it to be a vest.  The collar/hood construction took a little time to figure out, but it came out just the way I wanted it to (don’t you love when that happens!?).  I lined the hood and the pockets with this new fabric by Lotta Jansdotter called Woven.  I LOVE the print, but it is in fact, a woven, so it has no stretch.  It’s unfortunate because although I love the way it looks, the collar has lost all of it’s stretch and it’s actually a bit of a squeeze to get it over Yuki’s head.  Oh, there has to be at least one problem with everything I make!!  But at least it I’m learning . . .

So those are the 5 pieces that make up Boy-cycle Wear for Boys Week!  Even though we have a daughter, we have no issues putting her boys clothes.  Hideko’s style is more on the masculine side, so Yuki definitely gets the best of both fashion worlds.  I’ve never been into the standard definitions of femininity/masculinity or beauty and we definitely want to raise Yuki as free from gender stereotypes as possible – which of course, is impossible.  So far though, she seems to be a little tomboy, just like us!  She loves to run, climb and play ball and she’s totally obsessed with cars and planes.  Who says those things are for boys??

(maybe I should have made knee pads too!)

Well thanks for checking out my outfit for this week’s PR&P sew-along.  Next week the theme is Sewing Through the Decades – something inspired by fashion from the past.  Sounds fun, but I have NO clue yet as to what I want to make.  If you have any great ideas, I’m all ears!! 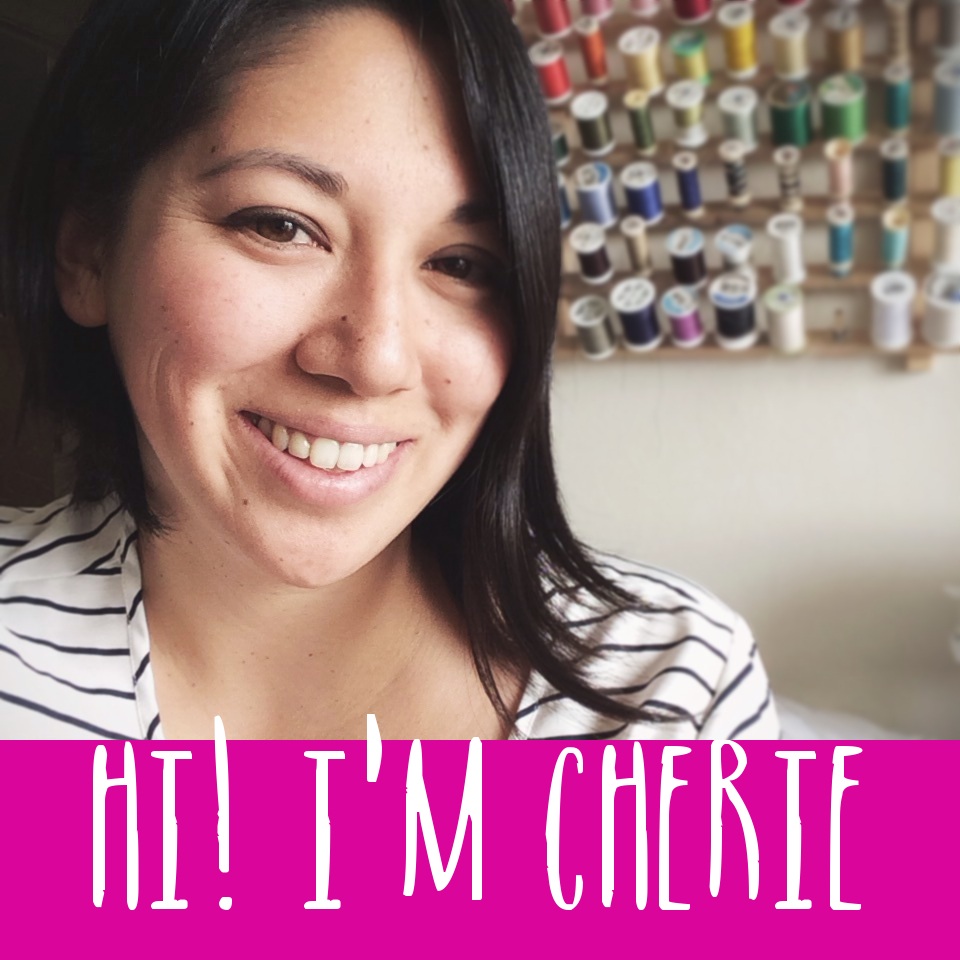