Made it through Day 1 of Kid Clothes Week Challenge Spring 2012!  Did you know that there are 640 people participating!?!  You should check out the flickr pool to see all the amazing clothes being churned out this week.

I’m really excited to be getting around to some projects I’ve had floating around my head for awhile.  I’m MOST excited about the Jump Rope Dress!  I decided to get this pattern because it was available as a downloadable PDF pattern from the Oliver + S site and I have a minor obsession with PDF patterns.  Plus I’ve heard so many amazing things about O+S patterns that I thought I should try one.  Then I saw Gail’s Jump Rope Dress and it is perfection!!  The thing I love most about it, is that I would never have picked that fabric for this dress, but Gail did, and I LOVE the way that it came out.

So I made myself a little schedule for KCWC, especially for the Jump Rope Dress.  Gail pointed out that they did a sewalong for the dress on Sew, Mama, Sew, awhile back so I looked at their schedule and they broke it up into 7 days.  The first day was tracing your pattern and cutting your fabric, which I’ve already done, so I figured I could just do the other 6 parts over the next 6 days and have a pretty little dress at the end of the week!  Well that’s the PLAN anyways.

I still have about 3-4 little projects that I’ll work on each day on top of the Jump Rope Dress and we’ll just see how much I can get done.

I’ll just say upfront though, that I plan on spending more than an hour each day sewing.  Even today’s project which was supposed to be a super simple refashion took me about 2 hours.

I bought this shirt at the thrift store because I really liked the fabric.  From far away, it probably just looks grayish, but it’s actually got super colorful and super tiny stripes. 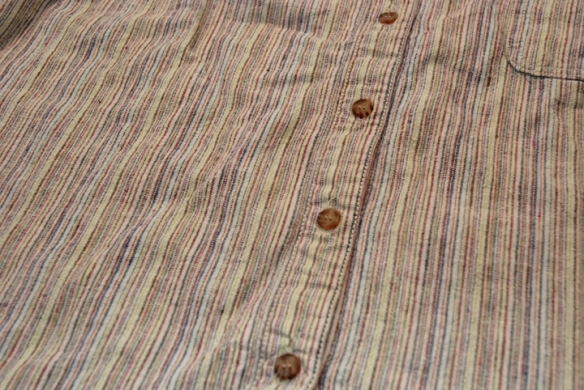 At first I was just going to cut out a rectangle over the pocket section of the shirt, hem it and make an elastic waistband and call it a day.  But of course, I like to complicate things.  I couldn’t use the section with the pocket because the sleeves started right there.  So I removed the pocket and sewed it back on right above the bottom of the shirt (yay, no hemming!).  Then came the idea for the pleats in the front, which I thought would look better with a flat front waistband and I didn’t want to fold over the pleated fabric, so I made a separate waistband.  A few mistakes and some ripped out and resewn seams (isn’t that the WORST?) and 2 hours later and I have this little skirt.  AND it somehow turned out too big!  I had to pin it for these photos, but I’m sure it’ll look great on her when she’s a bit bigger (like when she’s 4) 😛

I really do love it though.

Today’s task for the Jump Rope Dress was to make the placket.  Pretty intense, but following the sewalong post was really helpful.  I’m proud to say that I did not totally screw it up!  Plus, I have the hard part done and hopefully the rest will come together pretty smoothly.

I’ll try post an “in progress” pic of the dress every day that I work on it so you can see it come together. 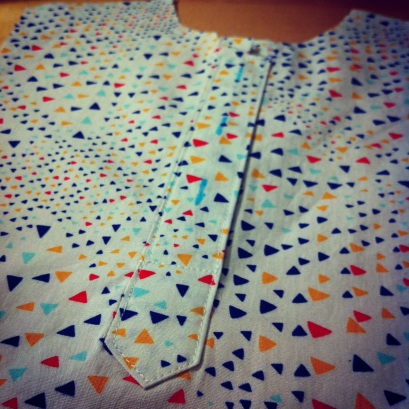 (it’s a joint effort, you know)