I’m so thrilled to be a part of film petit this month, a ridiculously awesome series hosted by Kristin from skirt as top and Jessica from A Little Gray.  For the series, Kristin, Jessica and a guest choose a favorite movie to use as inspiration for original children’s wear.

These ladies have fantastic taste in movies and incredible vision and sewing skills, so if you haven’t checked out the first two installments, A Life Aquatic and Amelie, check them out here and here.

When we were discussing movies for this month’s film petit, we were all drawn to several Wes Anderson titles (really, which Anderson film aren’t we inspired by??).  But we couldn’t deny how perfect Fantastic Mr. Fox would be for this season.  Not only is it a witty, well made, hilarious movie, but we loved the warm, rich, golden tones of the film, the amazing world of fantastic creatures, the apples, the farms, the fields – all of it, just screams AUTUMN!

The movie is about Mr. Fox, a reformed squab thief who has left his wild days behind for a life of domesticity when his wife, Felicity, announces that she is pregnant.  After living a responsible life as husband and father for 12 fox years, Mr. Fox finds himself wanting to provide more for his family and buys a gorgeous tree home despite how dangerous the location was for a family of foxes.

Life in their new home may not be as satisfying as Mr. Fox had hoped for and he finds himself restless and craving adventure again.  He cannot resist the temptation of a few nearby farms belonging to Boggis, Bunce and Bean, full of poultry and cider for the taking, and quickly dives back into the world he promised his wife he had left behind.

This movie is FILLED with amazing characters.  Though the title character is certainly fantastic, he shares the spotlight with a huge cast of hilarious creatures.

I feel like I could talk about all these characters and the movie for a long looong time, but this is already getting long and I haven’t even talked about my outfit yet!  Between Kristin, Jessica and me, we had so many ideas inspired by the movie that we could have easily outfitted a small fox army.

But what I was most inspired by was the gorgeous setting of this film.  The opening scenes of the movie show golden rolling hills and fields and the warmest yellow, orange and gold skies and fields.  I wanted to try and capture that feeling in my outfit. 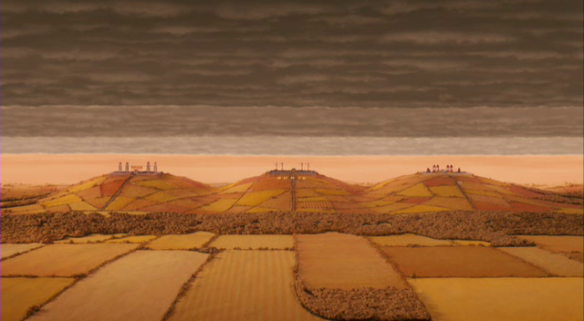 I love the Felicity Fox character, and as one of the only females in the film, she has to represent.  She’s a pretty kick ass lady and definitely the “brains behind the brains” as they call her.  She’s an artist, a landscape painter obsessed with painting dark and stormy thunderstorms, and also a strong wife and mother. 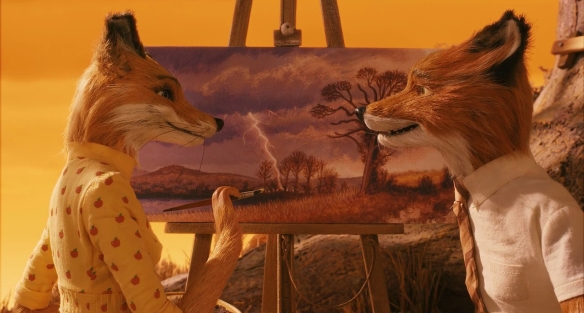 (some of Felicity’s paintings)

The opening scenes of the movie show a younger Felicity Fox, still the calm, patient and rational Mrs. Fox, but with a slightly more free spirited artist look.

I decided to try and capture these looks into a dress.

I used the Charlie Tunic pattern by Rae (thanks for the idea, Kristin!), which has that awesome neck facing and bohemian vibe. 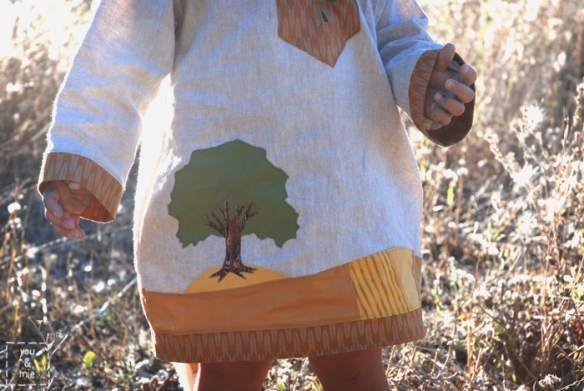 Of course, I had to include the iconic tree that catapulted Mr. Fox back into the crazy life of crime and became the battlefield between the animals and the farmers.  So I appliqued it onto the dress, and it added a nice pop of color.

The main fabric for the dress is a linen/cotton fabric in a light brownish gray, which was a nod to Mrs. Fox’s gray stormy paintings, but without making the dress too dark.  I pieced together some golden yellow fabrics to try to recreate the gorgeous hills from the movie (the striped fabric is hand painted).

I lengthened the tunic ever so slightly (though I realize now that it needs another couple of inches) and I added pockets.  My little sneaky fox LOVES filling her pockets with as many rocks as she can find.  This tunic pattern is really great (like all of Rae’s patterns), so definitely check it out if you’re interested. 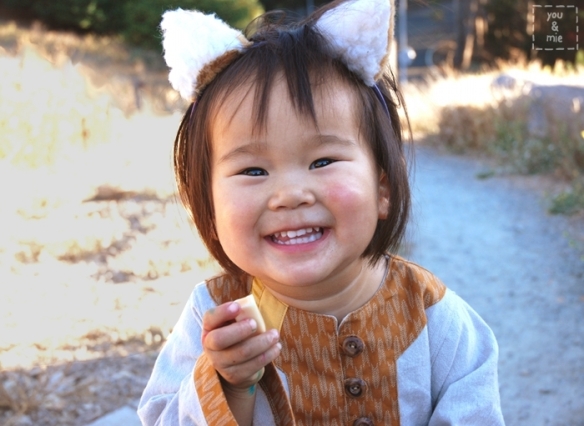 So that’s my clothing interpretation of this fantastic film, and seriously, I have ideas for a few more outfits still!  You absolutely MUST go and check out the most awesome shirt of the most awesome game EVER on A Little Gray and the ridiculously cute, straight-out-of-the-movie PERFECT Mr. and Mrs. Fox outfits on skirt as top.

But before you go, I just wanted to take a minute to tell you how amazingly awesome Kristin and Jessica are.  Not only are they amazing artists and sewists, with the most brilliant visions and ideas and MAD skills, but they are sooo much fun to work with, hilarious, humble, and extremely helpful, encouraging and sweet.  If you aren’t already following these gals, you absolutely must do it now.  Everything they touch turns to gold – they are definitely ones to keep your eye on.  And since I’ve been lucky enough to be a part of some film petit conversations recently, I happen to know that there will be a lot of AMAZING stuff coming up over the coming months that you will not want to miss!  I truly wish I could be a part of film petit every month!  So a huge thank you to Kristin and Jessica for letting me be a part of this series and being such awesome friends!

No go check out their awesome work and be in awe of their fantastic-ness and happy autumn to you all!