**I do not make Totoro Costumes for sale. **

*UPDATE: Since this post has been getting a lot of views, I figure I should at least add one photo of the finished hood.  This post was published with photos from her first fitting and after these were taken, I decided to add the whiskers and the leaf.  You can read more about that in this tutorial.  Hope you like it!* This year, I really wanted to make Yuki’s costume, but we could not decide for a long time what she should be.  We threw around some ideas, but none of them really excited me.  I’ve had this idea of dressing Yuki up as Totoro for a long time (since she was born?), but was worried that no one would know what she was.  But since I couldn’t think of anything better, I decided to go for it.  So what if I would have to explain a hundred times who she was supposed to be!  At least she would be adorable and original . . . right? Well, I finished most of the costume EARLY this year (meaning not the night before or morning of) and I’m a little unsure of how I feel about it.  It came out better than I expected in some ways and not as cute as I imagined in other ways.  In terms of the construction, I’m pleased.  I’d never made a full body suit before.  I’d never done an outfit with sleeves.  Or made a hood.  I just kinda made it up as I went along and it surprisingly worked out alright.  Actually, better than alright, it came out looking pretty damn clean.  On the other hand, it doesn’t look like Totoro to me.  I think there is something wrong with the shape.  Or the face.  Or the proportions.  I’m not quite sure and I might have to do a little more fiddling around (eek, that means I’m not actually done yet!), so maybe you can give me some feedback. I’m actually so impressed that I was able to get these pics of Yuki.  She does NOT like hoods or hats.  She generally rips them off the second we put them on.  I’d tried to get this hat on her a few times while sewing to see if it fit and she hated it.  She wouldn’t even let me get near her with it towards the end.  But I realized that if you keep her really really distracted, she won’t notice it for quite awhile. So in case you don’t know who Totoro is, he is a character from a Japanese animated movie, となりのトトロ or My Neighbor Totoro.  Although it’s a foreign film, there are quite a few people in the states that have seen it.  Here he is! 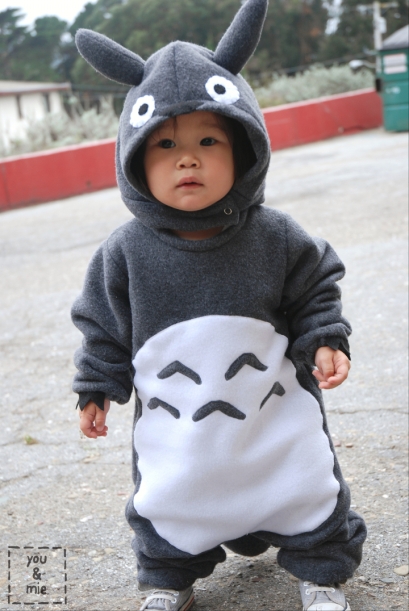 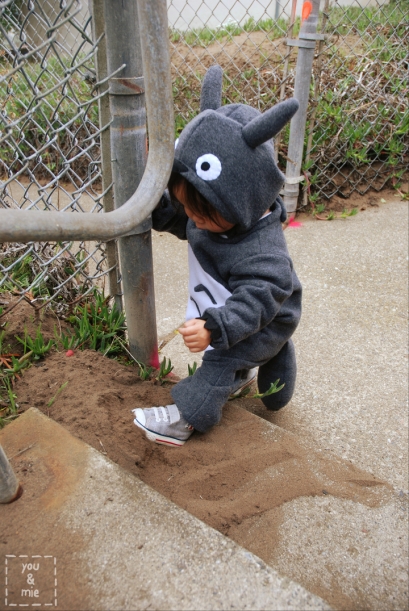 Something about this costume reminds me of Max from Where the Wild Things Are.  It’s well suited for making mischief!

I’m actually hoping that it’ll be cold on Halloween because this costume is made out of fleece and SUPER warm!  I need to make some adjustments, but here are some of the basic details of the costume.  Overall, it’s a pretty simple design that I based off of Yuki’s pajamas.

I zig zag stitched the chevrons on the chest and the white tummy to the rest of the suit.  This was the first part of the costume I sewed, and the first thing I sewed on my brand new machine.  It was dreamy 🙂

Instead of a zipper and snap in the front, I moved it to the back.

I also added elastic to the wrists and ankles and snaps to the legs for easy diaper changes.

For the hood, I used a hooded jacket to trace the shape.  I cut two pieces and sewed them together, then made the snap collar thing with a long rectangle.  I made ears (and the tail) with scraps of fleece and stuffed it with poly-fil.  Then I hand sewed the ears and face on. 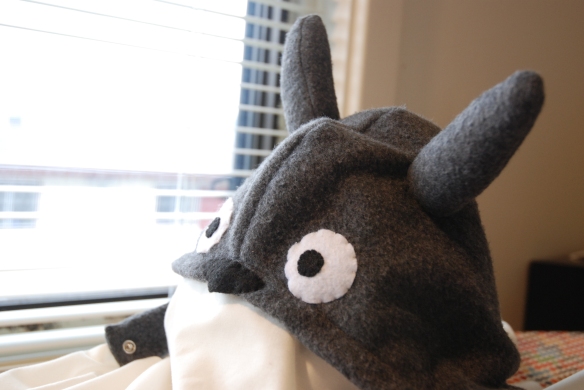 I want to add whiskers to the costume.  Any ideas for what I can use??  I want to use something smaller and not as sharp as pipe cleaners.  Maybe some yarn with fabric stiffener?  I’m taking suggestions.

Now I gotta work on my costume.  It’s going to be super simple this year.  What are you going to be for Halloween??